THE GOLDEN AGE OF MUAY THAI


Posted by Mass No comments: "I believe that fear and intelligence are two things very close together. If someone tells you I don't have fear, this guy is silly, he is stupid. I am affraid of everything" That was the words of Rickson Gracie, the MMA legend, in the documentary called " Choke ". I think that each person who trains in martial arts struggles with his fears, especially when you are a beginner. You walk down in the streets, you see the violence of humanity (physical or even verbal violence) and you feel insecured. You are affraid because you are small, because you are slender,  because you are not prepared to deal with extreme situations.
I saw this guy beating another one in the street, I saw hatered, I saw power and blood. What would I do if I was this victim ? How can I handle crisis situations ? This is the fear of confrontation, of fighting, the ultimate one for every human I think. And then, there is this marvelous moment where you come across a poster that says : " Tired of feeling insecured in the streets ? Prepare yourself to the worst situations with our experts in self defence. You'll never be a victim anymore!" That's the big day, the day where you decide to overcome your fear by get in a dojo. Personnaly, I have a wide range of fears. Fearing of talking to women, fearing of the boss, fearing of my brother, fearing of not giving my opinion, fearing of not pleasing to others... And fearing of confrontation, the ultimate for me... Now that I registered in an MMA club, sparring 3 times a weak in Muay Thai rules, grappling rules, free fight rules, I feel that my fears decrease gradually. We fight a lot in my club. Now, I feel that my body and my spirit are forging. I am ready to confront all my fears one by one. I am ready to rule my life. I am ready to face my demons. I am here, and I'm not going to run away. Testosterone is increasing in my blood, so does self confidence and assertiveness. The rules of the game are changing. The pieces of the chessboard are moving. I'm preparing a maneuver.

The day I saw Louis Geoff Thompson in the documentary called "Martial arts : the real story", I was immediatly fascinated. Why ? Because he is a true expert in self defence, one who know the reality of street violence, and who studied the internal process of fears even at a spiritual level. He analysed street fights and separated them in three phases : the pre fight, the in fight and the post fight. Very interesting ! The pre fight is the most psychological moment, the one where you fear and instinct are pushed to their limit and your body is sending you several kind of alert signals. Then, the fight begins and it becomes ferocious, just like a fight between two animals. When one or several fighters is down, you express your self like a lion screaming someting like " fucking get back ! " and you walk away.
I am very happy to share with you this interview of Louis Geoff Thompson, very kind, psychic, spiritual and realistic person. It's not only about fighting. It's about someting much more profound. Most fears are illusions. They are fooling our perceptions and then we make wrong decisions. Geoff is explaining you how to conquer your fears. The most interesting quote from him is for me : " When we change perceptions, we change reality".

Here is one the best martial arts documentary I have ever found. Enjoy watching it ! ;)


Posted by Mass No comments:

The Brazilian Jiu Jitsu revolution and the history of Royce Gracie

Evrything began by the travel of a japanese practionner of Judo and "Ju Jutsu" (orginal name of the art, meaning "the art of suppleness") : Mitsuyo Maeda... He was the one who taught Ju Jutsu to Helio Gracie and Carlos Gracie. Years after, Helio changed the techniques and adapted it to his small and slender morphology. Using intelligence, technique and leverage, Helio became the first national hero in Brazil by challenging and beating several martial artists throughout the country. That's how he created : Brazilian Jiu Jitsu, also called Gracie Jiu Jitsu. 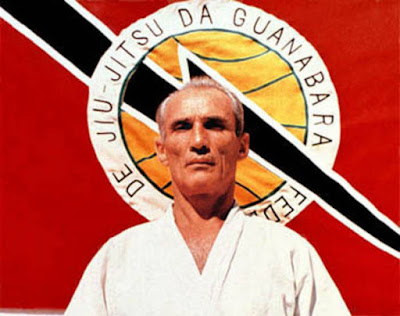 When Rorion came in the USA, he did as his father did : challenging everybody from several martial arts and beating them. And one day he decided to create a new kind of fighting sport competition where fighters from different style would fight in a cage with no rules, no rounds and  no time limit. It was the born of the ULTIMATE FIGHTING CHAMPIONSHIP (UFC). It was in 1993 in Las Vegas.
There were 16 fighters from :
- Boxing
- Wrestling
- Kick-Boxing
- French Savate
- Kung Fu
- Karate
- Judo
- Sumo wrestling
- Korean Tae Kwon Do
- Muay Thai
- Brazilian Jiu Jitsu.

From the whole Gracie familly, it was Royce who was choosen to represent BJJ, espscially because he was looking "undangerous". Royce fought against 3 guys : Art Jimmerson (Boxing), Ken Shamrock (Wrestling) and Gerard Gordeau (French Savate). Royce beat them all in an incredible demonstration of confidence, calm, technique, and the warrior spirit. He looked like a gentleman martial artist who controlled evryting in each fight. He won the first UFC by using Brazilian Jiu Jitsu submission techniques.

ROYCE GRACIE, the first legend of the UFC

Here is a very good documentary who shows all the story of Royce Gracie and the UFC.
It is just a part of it in youtube.
Click on this link to see the FULL DOCUMENTARY : https://vimeo.com/15607131

Hello fighters from all over the world !

I have recently discovered a very very very interesting man named John "Jocko" Willink on Youtube.
He is a former Navy Seal commander who served from 1990 to 2010, and participated in the well-know battle of Ramadi in Irak.
Now, thanks to his great experience in life, he is a leadership consultant and an MMA gym owner in the USA. He wrote a book called " Extreme Ownership ".

As a member of the elite american special forces, he has experienced martial arts, hand to hand combat systems and knows a lot about what works or not in a real self defense situation. This video is dedicated to the the true, effective, real martial arts. Have a good time !

These are some breathing techniques used in Brazilian Jiu Jitsu to relax before a fight, control emotions such as fear or anger, and also to manage your breath during the fight.
There are plenty videos where we Rickson Gracie doing this diaphragm repspiration.

We found those techniques in several disciplines throughout the world such as :
- Yoga (it is called "Pranayama")
- Systema (a russian martial art; one of its great master is called Mikhail Ryabko)